Trafford MV Wins Away AT SILLOTH 27-34

In fabulous conditions Trafford MV made the long journey North to Silloth on the Cumbrian shore of the Solway Firth.

The host Club provided a good playing surface and an enthusiastic home crowd as well as a competitive home side.

Trafford MV had a couple of forced changes with Ben Wheeler and Andrew Moore unavailable but the team were in good spirits on the back of two good opening performances. 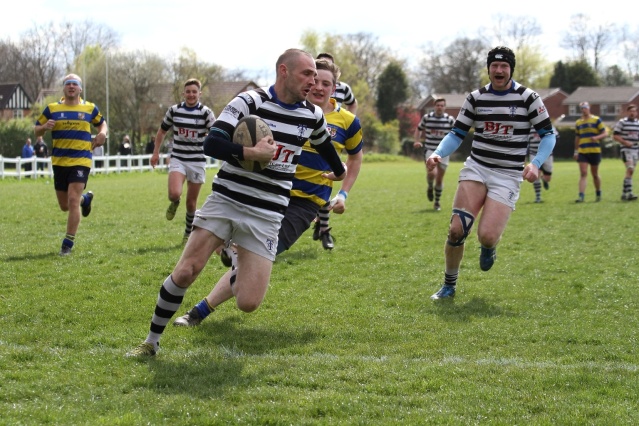 The game kicked off and from early exchanges it was clear that the Sale side were going to be dominant in the set pieces as scrum and lineout both looked solid and productive.

Both sides started lively with MV moving ball wide and the home side using big runners to crash the ball up the middle of the field.

MV’s expansive style of play brought early rewards as left winger Jon Lord rounded his opposite number to open the scoring in the corner for a 0-5 lead.

Both sides then had penalty attempts with MV’s hitting the top of the upright whilst Silloths split the sticks to narrow the score 3-5.

The home side were looking keen and some good possession led to a kick through which bounced off an MV defenders legs into the hands of the chasing attacker who left a flat footed defence for dead.

The converted try gave Silloth a 10-5 advantag, the home side showed bouts of in discipline which brought a yellow card for their scrum half and this failing gave MV some much-needed respite and some valuable free ball.

With time running out in the first half MV earned a free kick just on the home ’22 line. As MV kicked apparently to touch for an attacking line out but it was hooker Ross Anderson that spotted the kick falling short and sprinting to take the ball on the full and race over untouched for a real sucker punch of a try.

Patrick Eccles converted for a half time lead to MV of 10-12.

MV started the second half on top and looked the better side during a prolonged spell of pressure on the home try line.

After a number of stoppages as MV pressed the referee finally lost patience and awarded MV a penalty try which Pat Eccles again converted for a deserved 10-19 lead.

It was now or never for the home side as MV seemed to have control of the game and spurred on by the home crowd Silloth came back into the game with 2 well worked tries which really brought the game alive as they went ahead 20-19.

MV nosed in front when Pat Eccles launched a good penalty 20-22, Silloth then struck again to earn a bonus point and converted for a 27-22 lead.

This was a thrilling game for the crowd as the lead was exchanged several times and both teams strived for supremacy.

MV were tackling well and when centre Ed Brady won a turnover ball in the centre it was spun out quickly to winger Jamie Kingdon who powered through 2 desperation tackles to level the score at 27-27.

With a draw looking the likely outcome it was left to MV’s player/coach and stand-off Stuart Crampton to have the last say in the game.

The home defence expecting a wide attack Crampton stepped back inside and weaved his way through the defence scoring just to the right of the posts for an easy conversion to follow finalising the score at 27-34 to Trafford MV.

Man of the Match was MV’s Sean Garvey who had an outstanding game at blind side flanker in the MV pack.

This was a good away win for MV which brought a sought after bonus point which puts MV in 6th place in the Lancs / Cumbria league behind next weeks opponents Wigton.

MV will be looking to strengthen their team for this home fixture which is sure to attract a good crowd at MV’s MacPherson Park with a 3.00pm kick off.