Trafford MV’s season seems to be going from bad to worse and are heading for relegation. 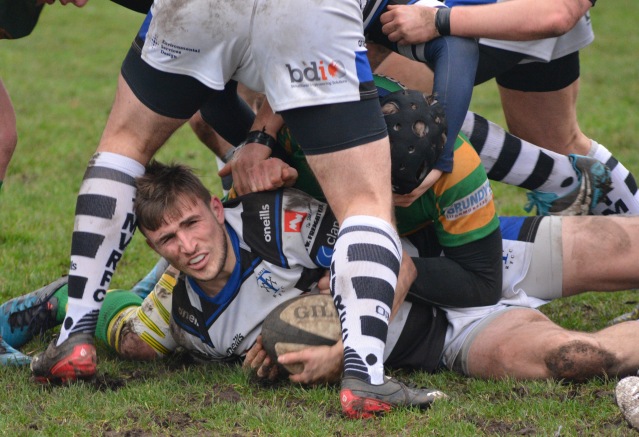 A much changed back line forced by players unavailable saw opportunities given to young players with others being forced to play out of their regular roles.

However it was often MV’s more regular selections that failed in the basic elements of rugby union. Defence has to be at the forefront of Traffords training focus. So many times MV allowed the home team to stroll though a passive defensive line, often without a hand being laid on the attacking players.

Man for man tackling seemed unheard of as Alwinians created overlaps at will and when the breaks were in the middle of the field the runner merely laid ball off to good supporting runners.

MV have to now make massive improvements if they are to stay in the ADM Lancashire Premier League!

Three first half tries had the game won for Aldwinians as MV only had a penalty to respond with.

A decent period of possession and pressure showed some promise for MV either side of half time but there was no reward. Both sides were very slow getting ball away from breakdowns and against a set defence there was no penetration from MV.

Credit can be taken by Captain Chris Ward, Andy Quigley and Aaron Fagan for determined defensive efforts and many players need to take example from veteran forward John Kevan who was still grafting away after 80 minutes whilst still playing in his fifties.

Aldwinians collected their bonus point and continued to threaten throughout the second half scoring finally in the last minute to close their account at 44-3. MV’s only points coming from a Dom West penalty.

This weekend MV will be at home in a must win game against Wigan who MV defeated by a single point earlier in the season 17-18.

Something dramatic has to happen if MV are to turn the season around, a win this weekend could be just enough to trigger the change but the odds are stacked largely against the club avoiding relegation.

Trafford MV are calling out to supporters of the Club to get down this weekend to cheer the team on at a 2.15pm kick off and enjoy the start of the 2020 Six Nations Championship.