Fancy a walk with the Friends of Turn Moss group to celebrate green spaces and parks well you can join in, the fun starts at noon on May 12th from Manchester Town Hall to Jackson’s Boat via Turn Moss, you can join in at any part of the route.

The route can be seen below: 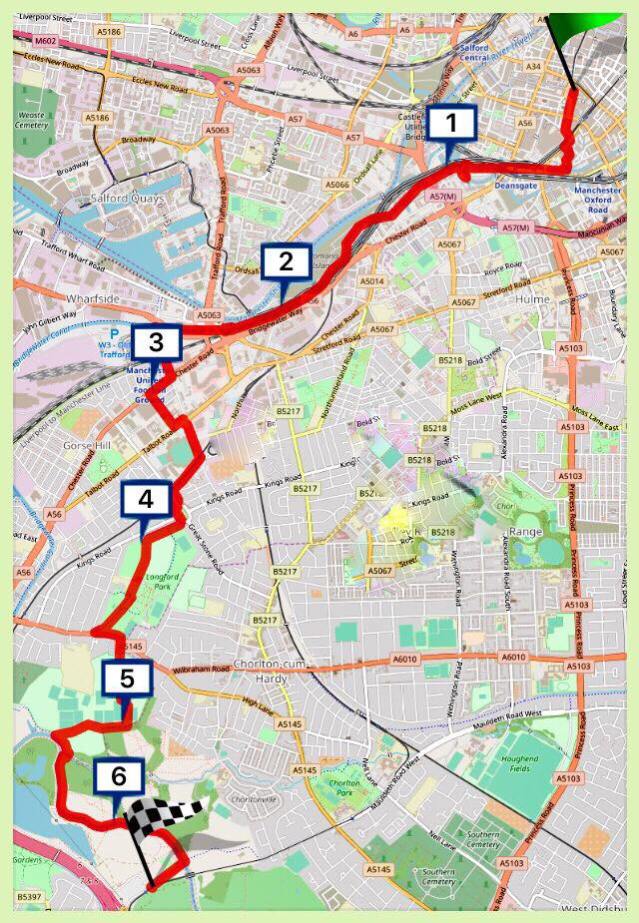 Co-organiser, Andrew Read said, “The route forms part of the projected ‘GM Ringway’ long-distance trail and shows how Turn Moss connects with our precious network of waterways and green spaces with only around ½ a mile of walking alongside roads required.”

The Friends’ Chair, Simon Howarth said, “We always wanted the walk to be a celebration of our parks and green space, and now that the ill-conceived plans to develop on Turn Moss have been put on hold – and will hopefully be confirmed as scrapped in the coming week – we can really relax and enjoy ourselves. It’s now up to us to come up with better plans, in consultation with the whole of the community and including the football teams who use Turn Moss currently. This is what the Council failed to do. Our campaign has brought together Stretford and Chorlton in a way that has never really happened before. We’ll be joining together for this walk.”

Co-Chair, Nigel Woodcock added, “We really want everyone who values urban green space to join us – especially the Friends of Longford Park, which might get some investment now, instead of the Council borrowing millions to ruin the green belt over the road. Those who favour a short walk can join us at Longford Park at 3.15pm.”

The walk will be dog-friendly, and wheelchair and push chair users can join at Trafford Town Hall. There is also the suggestion of a feeder walk from Sale, meeting at Turn Moss at 3.45pm.

“Thanks to the vote last Thursday, we can feel more confident about the future,” Dr. Woodcock added. “There’s just so much to be happy about for all lovers of nature and green space in Stretford and Chorlton. Now we want to maintain the solidarity which has grown between the two communities, in order to see off the flawed UA92 proposals – an ill-considered vanity project based on property speculation.”

The walk will end at Jackson’s Boat at 4.30pm, and is supported by the Friends of Longford Park, Stretford In Bloom, the Ramblers, Chorlton Wombles, The Stretford & Chorlton Socialist Club, and the Lancashire Campaign for the Protection of Rural England, among others.

Cordial refreshments will be available free of charge at Longford Café and Jackson’s Boat.