A Partington junior football team has made the final to be in the running for ‘club of the year’ at the Greater Manchester Sports Awards.

For 19 years, Greater Manchester have celebrated the outstanding commitment and achievements made in physical activity and sport across the County through The Greater Manchester Sports Awards and this year’s event is fast approaching. The 2019 event will take place on 15th November at The Point Emirates Old Trafford. 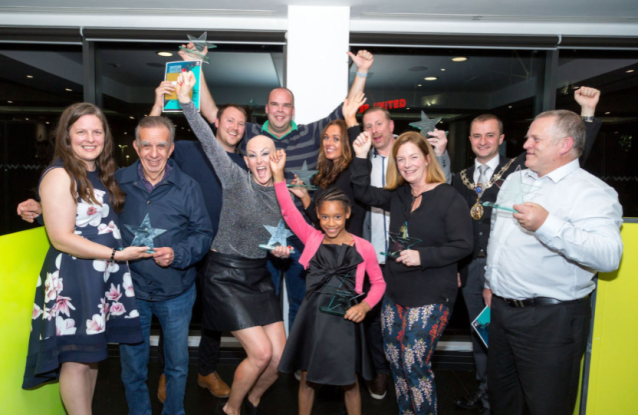 The Trafford Sports Awards were held at Hotel Football on 4th October and the winners on the evening who will now represent Trafford at The Greater Manchester Sports Awards are;

Changing Lifestyle – This award recognises individuals who have used physical activity to transform their lifestyle for the better.

Victoria used to be a keen runner, but lost her hair to Alopecia in her thirties. Victoria’s enthusiasm for running disappeared as running with a wig was hot and uncomfortable. Then Victoria signed herself up to the Solemother group and despite reservations, she started running again and could see the difference in her fitness, confidence and mental health.

Club of the Year – This award recognises a community club or community group who has had an impact in their local community.

Moss Lane Rovers provides girls football for all ages with a very proactive committee and a clear commitment to engage with the community. The Club is passionate about developing opportunities for the local people to participate in football; they invest back into young people within the local area by developing them as coaches and volunteers, giving them vital experience.

Young Sports Achiever of the Year – This award recognises young athletes (aged under 18) who are not professionally funded who have had significant success in their sport.

Akyra is an elite gymnast placing first in all competitions this year. At only 9 years old Akyra is committed and focused on achieving her dream of competing at the Olympic Games and winning a gold medal. She trains 23.5 hours per week with extra sessions through the school holidays and is currently working on new skills to hopefully qualify again for the national finals.

Unsung Hero – This award recognises long term volunteers (over 10 years) who have made a significant difference.

Damian has been involved with Urmston Meadowside FC for almost 20 years. He became a coach 12 years ago and for the past eight years has been Club Secretary. On top of his secretarial role, Damian coaches several teams and goes well beyond the call of duty, dedicating around 25 hours per week. He is at the heart of the club being the first point of contact for the majority of matters.

Volunteer of the Year – This award recognises those who have given up their time to volunteer in sport or physical activity.

Jamie is one of the founding members of Stretford parkrun and has been the Event Director for the past four years. He’s involved week in week out as a volunteer and volunteers at junior parkruns so that children can be active too. Jamie welcomes everyone who visits the runs and has been instrumental in the huge success of Stretford parkrun which now welcomes, on average, 500 participants every week.

Workforce Advocate – This award recognises an individual that has used physical activity or sport within their professional role to have positive impacts.

Yvonne has been the driving force behind the establishment of Walk for Health in Trafford. She initially set up a walk for members of her GP practice as a way to get her patients more active. This has now grown to 11 walks linked to 13 GP Practices across Trafford. Yvonne has a passion for helping get others active and has helped organise training for walk leaders alongside her busy professional life.

School Commitment to PE and Sport Award – This award recognises schools that have gone above and beyond in respect to incorporating activity into a school day for their pupils and staff.

Heyes Lane is committed to delivering high-quality PE alongside providing opportunities for competition. It drives inclusion and success at all levels. Every lesson delivery is tailored to suit the needs of all pupils. The school is also aspiring to help the community be more active. The ethos is very much on participation rather than success. Heyes Lane puts physical activity and better mental health at the heart of the school, launching ‘Be The Best Me’.

Initiative of the Year – This award recognises a physical activity initiative, which has made a difference in communities and achieved positive social outcomes.

Solemother was established by Grace Lees in January 2017 after she couldn’t fit any other kind of exercise into her busy life as a working mum. She set up a Facebook group and started running with fellow mums. Solemother has grown over the last year and currently has 933 members. Solemother isn’t just about the running, it’s all about the women involved; it’s about getting out, being active, feeling good and supporting others.

“In Greater Manchester we are passionate that everyone has the opportunity to move more including taking part in an activity that suits them. The finalists at these awards do just that… whether they’ve encouraged their colleagues, family, friends, pupils, community to be more active or directly provided opportunities for people to get involved this is our chance to recognise and thank them.”

For more information on the Awards including all the finalists on the evening visit www.greatersport.co.uk/awards. The winners will be shared on twitter using #GMSportsAwards on the evening.