Trafford has the highest recycling rates in the North West

6 out of 43 councils in North West are currently hitting the UK government household waste recycling targets of 50% by the year 2020.

Some councils in the North West are setting a prime example for the UK, though the majority fall below the target number with little time to address this before 2020. 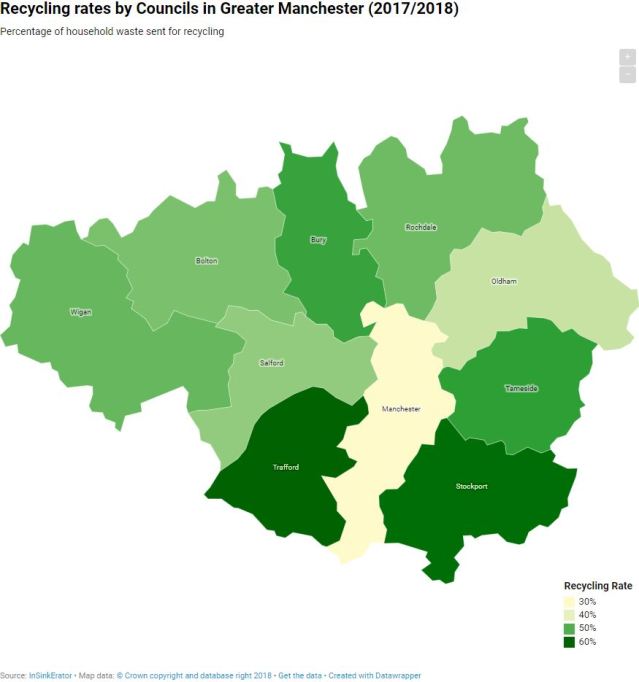 The recycling rate map, produced by waste experts InSinkErator, aims to raise awareness of the need to encourage recycling if the local authorities are to hit the UK target of 50% by 2020.

One issue which needs to see vast improvement is food waste which is at crisis levels in the UK. Although food waste being sent to composting is increasing year-on-year, 20% of all food that is produced is still being thrown away. Despite this, food waste remains a small proportion of waste collected in the UK at just 2%.

Collected garden waste accounts for 17% of the total, 26% is dry recycling such as card and plastic, and finally 55% is residual waste from regular black bin bags which is not recycled.

The UK government has highlighted five strategic principles to ensure the target is made:

Chris Vella-Bone, the Ecommerce Manager for Europe and Russia at InSinkErator, comments on the latest results release, saying:

“The recycling data from DEFRA is a great opportunity to make a real change for the future of our planet. At InSinkErator, we believe that everyone should be aware of the impact that all kinds of waste can have on our environment.

Food waste in particular is a growing issue. With the increasing amount of unavoidable food waste generated in the home, and the difficulty for many to dispose of it, a food waste disposer is a discrete asset to any home.”

You can find more information on InSinkErator by clicking this LINK